Back in the 1980s, when Dr. Tang Liang was a teenager in Guizhou, China, he developed an interest in fixing electronic devices. The interest came about for very practical reasons — he wanted to be able to repair any damaged electronic devices, such as television sets and radio receivers, that he had at home. These devices were expensive to replace and often broke down, hence learning how to fix them was the most feasible option. Liang thus developed an expertise in how these devices worked, which later prompted him to pursue his higher education in the fields of electronics engineering and computer science.

Liang obtained his bachelor’s and master’s degrees in electronics engineering from East China Normal University in Shanghai. After graduating, he held various engineering roles in companies such as Huawei, OKI, Broadcom, and Wipro Technologies. One of his career highlights is designing the WiFi chip that is used in the Apple iPhone and other smart phones today. Liang was working in Broadcom Australia at that time, and he was able to propose and implement a new testing methodology that helped to check the design of the chips. During one such test, Liang found a critical error hidden within the WiFi circuit. After doing deeper research, he managed to fix the bug, and the chip was rolled out smoothly. Given the number of smart phone users today, it still gives Liang a sense of achievement whenever he thinks about all the people benefitting from his design. “Imagine having millions of users using your design — anyone would be proud of it,” he says.

After spending a few years in the industry, Liang decided to further his education by getting a Ph.D. In order to gain deeper interdisciplinary knowledge in the field of embedded systems, he joined the University of New South Wales’ (UNSW) Embedded Systems Lab. During his time at UNSW, he had observed that the professors from the electronics and computer engineering departments worked closely together to research the next generation of computer processors. When it was time to choose his research area for his studies, Liang picked computer science. Liang also furthered his understanding of specialized computer science topics such as computer architecture, compilers, operation systems, and data security.

Upon completing his Ph.D., Liang moved to Singapore, where he was a research fellow at the National University of Singapore for just over a year. Shortly after in 2015, he joined DigiPen (Singapore) when the Institute first set up its Electrical and Computer Engineering department. After years of working in the industry and honing his own skills, Liang felt it was time to share his experience with others. “As an engineer, I had the privilege to work on many cool projects. However, I did not have many chances to share what I learned, as I was always busy working on the next designs,” Liang says. “Teaching not only gives me the opportunity to shape and mentor the next generation of engineers and industry leaders, but it also allows me more flexibility to do research in my interest areas.” 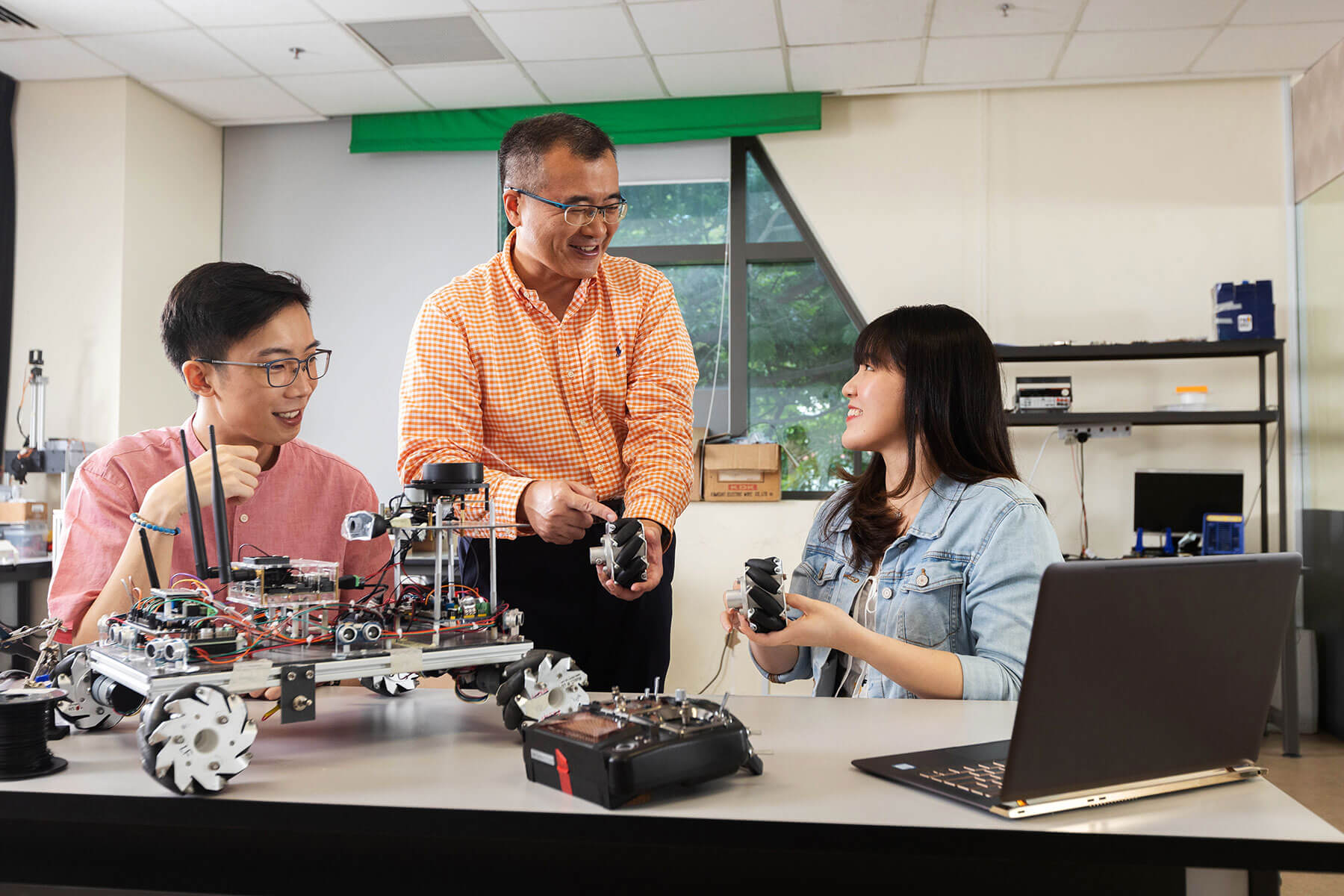 Today, Liang proudly shares his engineering experience and knowledge as DigiPen (Singapore)’s faculty chair of the Department of Electrical and Computer Engineering. He strongly believes that every student has the potential to be excellent in certain fields and hopes to bring out the best in his students by inspiring and guiding them. Liang currently oversees the capstone project classes and teaches modules in digital electronics and systems engineering projects. Of all the classes Liang teaches, he has a soft spot for the systems engineering project modules, as these classes allow students to apply what they have learned from various subject courses by integrating and designing complete mechatronics systems. “As an instructor, I am happy that our students can apply their knowledge and improve their abilities,” he says. “Moreover, preparing for these projects that cover topics such as autonomous vehicles, navigation, computer vision, and robotic operating systems also lets me learn the latest technologies when guiding students to build their prototypes.”

Since Liang’s first forays into the field of engineering, it has been an exciting journey from which he has never looked back. When asked what he loves most about the subject, he is quick to reply that he’s proud of the fact that the world is created by engineers. And with that, Liang looks forward to exploring the next frontier of engineering with his students.