Larry Low Yun Long, a DigiPen (Singapore) graduate of the Bachelor of Arts in Game Design program in 2015, has made his mark as a digital designer at the Procter & Gamble Innovation Center in Singapore.

Procter & Gamble, an American multinational corporation headquartered in Cincinnati, Ohio, and a leader in the Fast Moving Consumer Goods (FMCG) sector, manufactures a wide variety of well-known products that ranges from personal care products to household goods for billions of consumers worldwide. 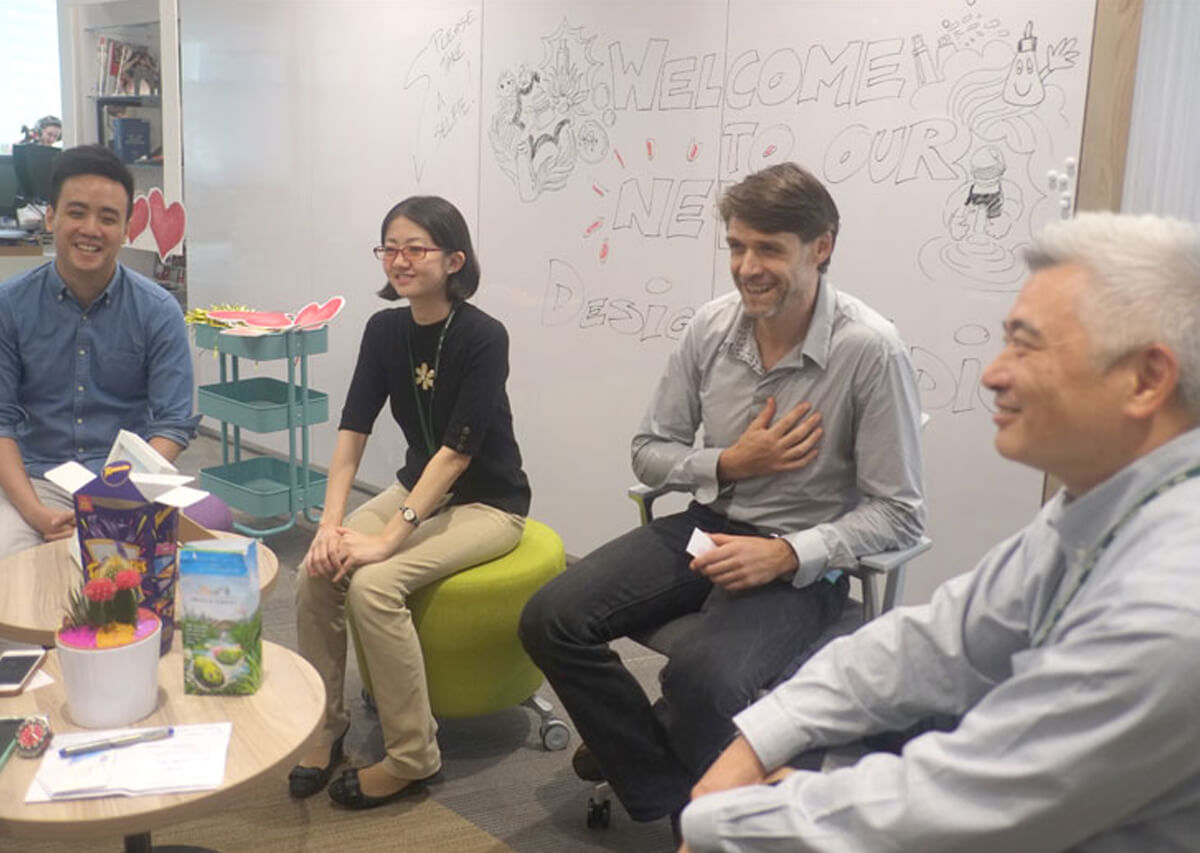 One of the many projects that Larry has undertaken is the new shrink sleeve bottle design for the shampoo brand, Head & Shoulders, which is currently the world’s number one brand of shampoo in terms of sales, according to Mr. Marc Lorenzi, Larry’s supervisor, as well as R&D technical leader and manager.

I was tasked to create a new shrink sleeve bottle concept design that would be used for consumer testing,” Larry said. “It was a significant challenge because I was given just four days to produce a design. After a week, the design was printed on the bottle. The result was fantastic, and I was very pleased with how beautifully it turned out.”

Larry explained, “I used Adobe Photoshop initially to create several drafts of my designs. Once I felt they were ready to be polished, I imported them into Adobe Illustrator to create them using the required dimensions. I used Adobe Illustrator because it is based on vector graphics, whereas Photoshop is based on raster graphics, which could result in a loss of pixels during printing or resizing.”

“My design was used for consumer testing in China and received positive feedback. Every panelist who saw it loved it. It was then approved by the commercial team, and they are planning to launch it in China, where there could be a billion consumers purchasing the product with the design I created,” Larry described.

Larry’s digital designer position was one that required someone with a wide and versatile range of skill-sets and ability to understand consumers’ needs and likes.

“We interviewed many people for this position.” Mr. Lorenzi said. “We interviewed a lot of people from the local universities, and we really struggled to find candidates who have that concept visualization thinking. It requires a certain type of thinking, like how do you put yourself in a consumer’s mindset. That is really critical. Everything we do is consumer-focused. It takes a certain type of person to see it from that point of view.”

Larry was the person that P&G was looking for. After his six-month internship at P&G, he was offered full-time employment. Acting as an intermediary between the software engineers and the marketing and sales teams, he harnesses his knowledge of programming, design, and art, which he gained from his education at DigiPen (Singapore).

“In some of my classes, we were taught scripting. In addition, I took C and C++ classes, where I learned how to delve deeper in programming languages with standard libraries and optimization,” Larry said. “As a result, when I discuss programming languages with software engineers, I can understand their points of view and am able to translate this into a relatable language to the artists. Then, as a team of artists, engineers, and designers, we can create visuals together. For example, if I need to create graphics such as shaders, reflectors, and ambient occlusion, it is possible that an artist might not understand these terms. So I have to translate the programming language to one that artists understand.

“As a student at DigiPen (Singapore), we were given many projects where we collaborated with programmers and artists, so we learned how to use our design skills to communicate with them. The programmers create the functions, and the artists create the visuals. As designers, we combine both the functions and visuals to create a game or product that is user-friendly and enjoyable for the audience.” 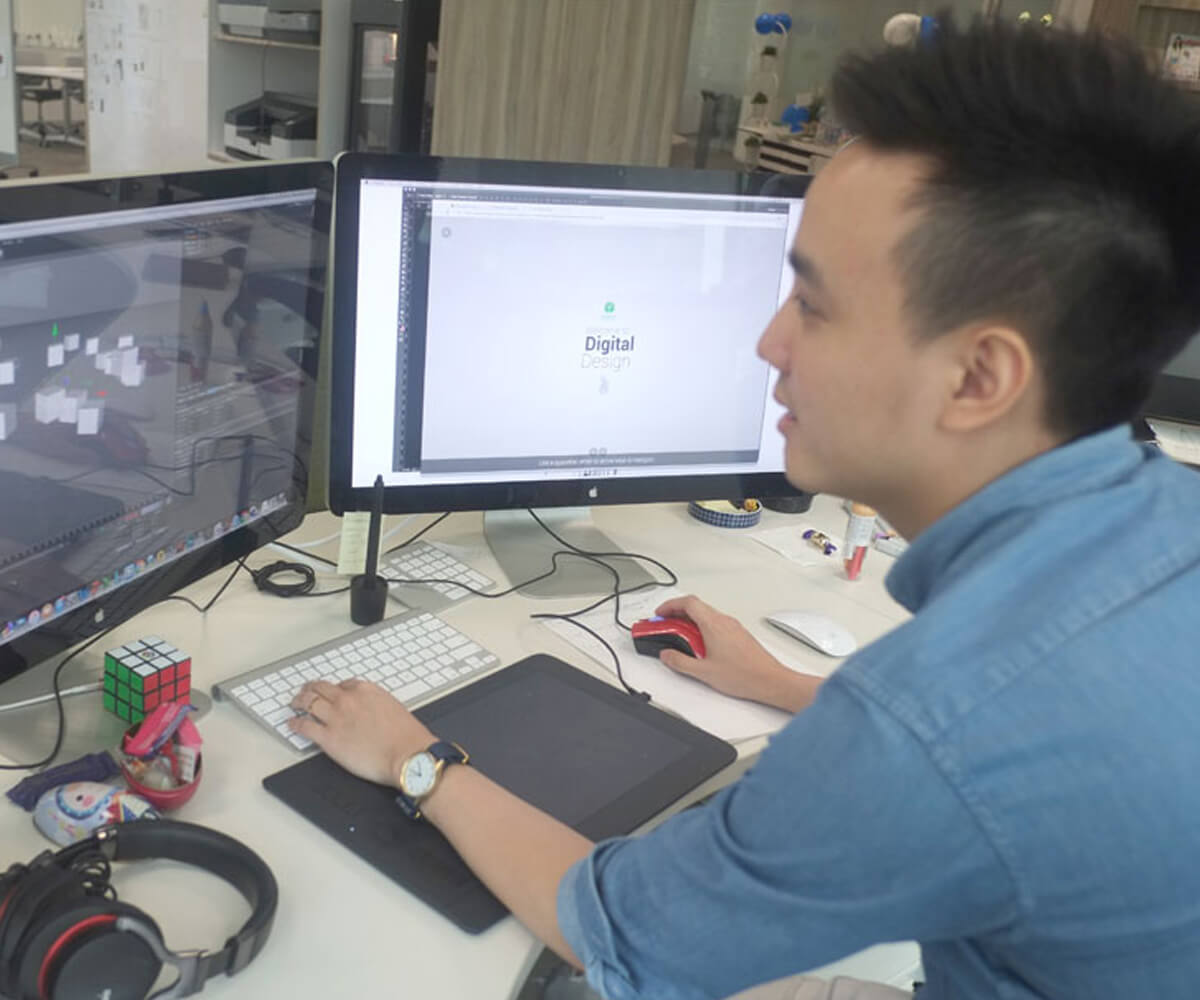 To showcase his portfolio and demonstrate the benefits of digital design in innovation to P&G, Larry created an interactive 3D website using Impress, a JavaScript plug-in.

“I did not have much prior knowledge in HTML, CSS and JavaScript,” Larry said. “Fortunately, the programming courses that I took at DigiPen (Singapore) helped me greatly in understanding the programming paradigm, and I was able to apply it to the new languages.”

Larry continued, “Working in FMCG industry was not something that I previously envisioned; however, after the P&G recruitment talk at DigiPen (Singapore), I was intrigued to learn more about how P&G interacts with consumers and how I can apply my skill-sets to create an enjoyable experience for those consumers. Working with P&G allows me to understand how to interact with consumers, the FMCG sector, and consumer patterns of countries such as China.

“Game design does not necessarily have to be applied to just games. My work at P&G allows me to apply the design theories I learned to create innovative experience for its consumers. In the FMCG industry, I am able to gather feedback quickly and understand consumer behavior and human interactions.”

It is a rewarding learning journey for Larry, and he believes that applying the knowledge he gains through his work experience will eventually lead to his dream of having his own game company that produces games for the expanding market in China.