Many graduates of DigiPen Institute of Technology Singapore go directly from their senior year to a career in the video game industry, earning titles such as software developer and game programmer at some of Singapore’s top studios.

Perhaps less well known, however, are those DigiPen alumni who pursue careers outside of the video game industry, where they can use their skills to build software systems, develop complex tools, and manage information technologies. High-tech skills are in demand throughout Singapore and abroad, and employers are looking to hire new professionals whose education has prepared them for an ever-evolving technological landscape. 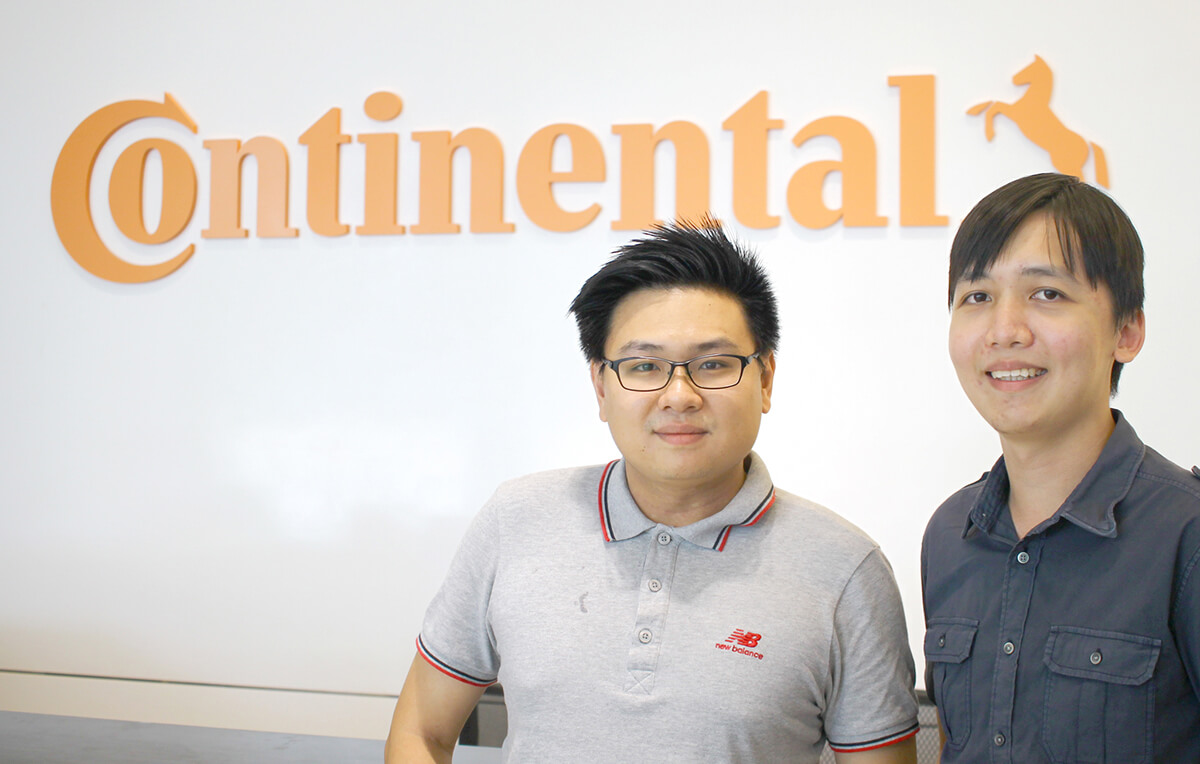 Jason Ngai and David Seah each graduated from DigiPen Singapore’s BS in Computer Science in Real-Time Interactive Simulation (RTIS) degree program, and each was offered a job shortly thereafter as a software engineer at Continental Automotive Singapore Pte Ltd. Though they share similar job responsibilities, Jason and David took different paths to get to Continental Automotive, and their diverse interests have led them to successful careers developing graphics systems for one of the biggest companies in automotive engineering.

Jason, who worked as a web developer before enrolling in the RTIS program, enrolled at DigiPen Singapore primarily to improve his software development skills. Though he didn’t set out to work at Continental Automotive after graduation, his lifelong interest in automobiles and programming prowess made him an ideal candidate.

“I have liked cars since forever,” Jason says enthusiastically. “The idea of making games after graduation was definitely one of my plans, but I kept my options open. Luckily for me, I chanced upon Continental’s offer for a role as a Software Engineer for Human-Machine Interface in automobiles. Since I liked cars and engineering for visuals, I figured, ‘Why not?’ And here I am today.”

David, on the other hand, is more interested in the intersection of software and automobiles, especially in regards to how technology will change the automotive landscape. “I started to take interest in cars when Tesla Motors came out,” he says. “I am excited about technology that will enable cars to make better decisions based on their ability to communicate with other automobiles, their surroundings, roads, and traffic lights.” The opportunity to work at Continental, says David, has been a great chance to further explore this area of interest.

The Right Tools for the Job

David and Jason both agree that studying at DigiPen Singapore more than prepared them for the daily challenges they face at Continental Automotive. In particular, Jason is thankful for the graphics courses taught by Professor Prasanna Ghali. “Although [Continental’s] projects are based on custom hardware, the concepts of computer graphics, application interface layers, and rendering have never changed,” says Jason. “[Thanks to Ghali’s courses], it wasn’t too difficult for me to understand the underlying concepts and limitations of the custom hardware or implement tools for rendering optimization concepts.”

As software engineers, Jason and David are responsible for implementing new software and graphics features for the various automotive parts produced by Continental. King Young Lee, a senior manager at the company, notes that the skills David learned at DigiPen made him an attractive candidate for the position. “Graphics technology and implementation of graphics software for gaming is directly relevant to our new generation of products with graphics and animations,” King says.

David agrees that the technical abilities and soft skills he picked up during his years at DigiPen Singapore have been invaluable. “The game project [at DigiPen] definitely helped me understand how software systems work,” he says. “When dealing with a bigger system like Continental’s, having a good foundational knowledge of systems makes the work less intimidating. Working in multiple game project groups also taught me how to communicate effectively and work as a team.”

In addition to graphics classes, Jason is glad to have a solid base of software development knowledge. “My job often requires me to revisit what I learned [at DigiPen],” Jason adds, “especially in regards to graphics and operating systems. It is really good to know that most of what we learned in our core computer science modules is relevant outside of the game industry.”

A World of Opportunities

Employing his degree at Continental Automotive has proven to be the right move for Jason. “I’ve actually found that I enjoy doing this kind of work more than I expected,” he says. For the foreseeable future, Jason hopes to engage in further research and development at Continental while growing alongside his team members. “I have always been interested in trying to create something innovative and groundbreaking,” he says.

David is enjoying the impact he has been able to make at Continental as well as the opportunity to work alongside other talented coworkers, both within the office and abroad. “I have great teammates who are always more than willing to help and teach me new things,” says David. “I also get to interact with teammates from all over the world.” Speaking of his future, David hopes only to be a master of his craft—a lifelong journey that he began at DigiPen.

Regardless of where their careers take them, David and Jason are both excited for what the future may hold, and each continues to draw lessons from their times at DigiPen. “I still occasionally pull out the framework that I created for my Advanced Graphics classes and test some rendering concepts,” says Jason. “Even to this day, it still provides a good playground for experimentation, especially when I have tricky requirements and office hours alone are not enough for planning.”

“DigiPen was really tough and many times I was pushed to my limits,” David says. “However, looking back, without the training I had there, I would have never been able to reach the level I’m at today.”