DigiPen (Singapore) caught up with the 2016 Bachelor of Science in Computer Science in Real-Time Interactive Simulation (RTIS) valedictorian, Chin Jia Hao. Currently working as a junior gameplay programmer at Ubisoft Singapore, he shared his tips for aspiring students looking to join DigiPen (Singapore) and the game industry.

Jia Hao was nominated as the valedictorian on the basis that he had the highest GPA amongst his cohort. While he admits that he is not the best programmer, he attributes his good grades to enjoying soft subjects like English and the humanities. This, he says, made him well-rounded academically, allowing him to thrive in DigiPen’s multidisciplinary environment.

With game projects, Jia Hao gave some insight on how he balanced his time when academic deadlines loomed. “I would look at the assignments and prioritize tasks that had the closest deadline,” he says. “As for game projects, my advice is to optimize the process. My team developed a 3D game engine in the holiday semester of our second year and it stuck with us all the way. This gave my team more time to develop the game itself rather than worry about the engine, and it gave us more time to prototype rapidly and throw ideas out quickly. We also spent that holiday semester ironing out bugs.”

Jia Hao also acknowledged that his successful game projects were due to his team members being good at their roles, quick at completing tasks, and willing to go the extra mile by burning the midnight oil.

However, he also admitted to having an academic weakness when he first started studying at DigiPen. “I figured that programmers probably don’t have to do that much mathematics, and I was wrong,” he says with a laugh. “During the preparatory mathematics course, I had to ask my junior college friends about some of the terminology; it looked like Greek to me. Math was my weakest subject and the subject I feared the most when I first got into DigiPen.”

“When the first quiz for my first mathematics course came around, I spent three full days studying like mad on the subject, and as a result I over-prepared for it,” he recalls. “So I was surprised to find out that I did pretty well for it when the results came out.”

This, he says, was also the moment he realized he could improve his approach to studying mathematics and new subjects that intimidated him.

“The reason why I had been so bad at math all this while was because I gave up before even trying,” he says. “I looked at a concept at a superficial level and decided that it was too difficult for me back then. So I took this new approach of ‘just dig in and try to understand’ with all of the new subjects that came my way, and it worked for me. I ended up getting mostly A’s.”

During Jia Hao’s time at DigiPen (Singapore), he named two notable faculty members who left an impression and helped him on his journey as a student. The first was former computer science lecturer Sang Le Ngoc, whom Jia Hong praised for his passion for teaching computer graphics. The other instructor, he says, encouraged him in mathematics.

“Dr. Michael Jahn was my math professor. He was really concerned with the students’ progress and was willing to stay after hours to explain concepts to the students who didn’t understand them. He was very patient to the extent that he would still be there after an hour of the class ending,” he says. “He was also willing to slow the curriculum to make sure everyone is on track and that they are able to fully understand what is taught.”

His general advice for students at DigiPen is to try and fully understand what is being taught in class and become self-reliant, because you never know when your technical skills will be put to the test.

“When it comes to exams and tasks, you are the most reliable person to depend on. A friend could help you fix a [section of] code for you, but in the end you should make the effort to really understand the rationale behind the code as well,” Jia Hao says. “One of the lecturers mentioned that if you could explain the concept to an ‘average Joe’ and they understand, then you’ve truly understood your subject.”

After graduating from DigiPen (Singapore), Jia Hao said that he had wanted to work at a triple-A game company, and it was a small dream of his to work at Ubisoft Singapore. He actually got his start at the company when he signed up for an internship during a breakfast meet-and-greet session with Ubisoft Singapore. That internship later extended into his final semester at DigiPen and eventually resulted in a full-time position.

“It feels really cool to be a part of a really big game,” he says. “I enjoy the working culture here.”

He also says he enjoys the way Ubisoft portrays its stories in games like the Assassins Creed series, as he ends up learning about the history and culture of the games’ settings.

“Sometimes I’ll end up looking up a historical figure that was mentioned in the game, so it becomes a fun, interactive history lesson in real-time,” he says. 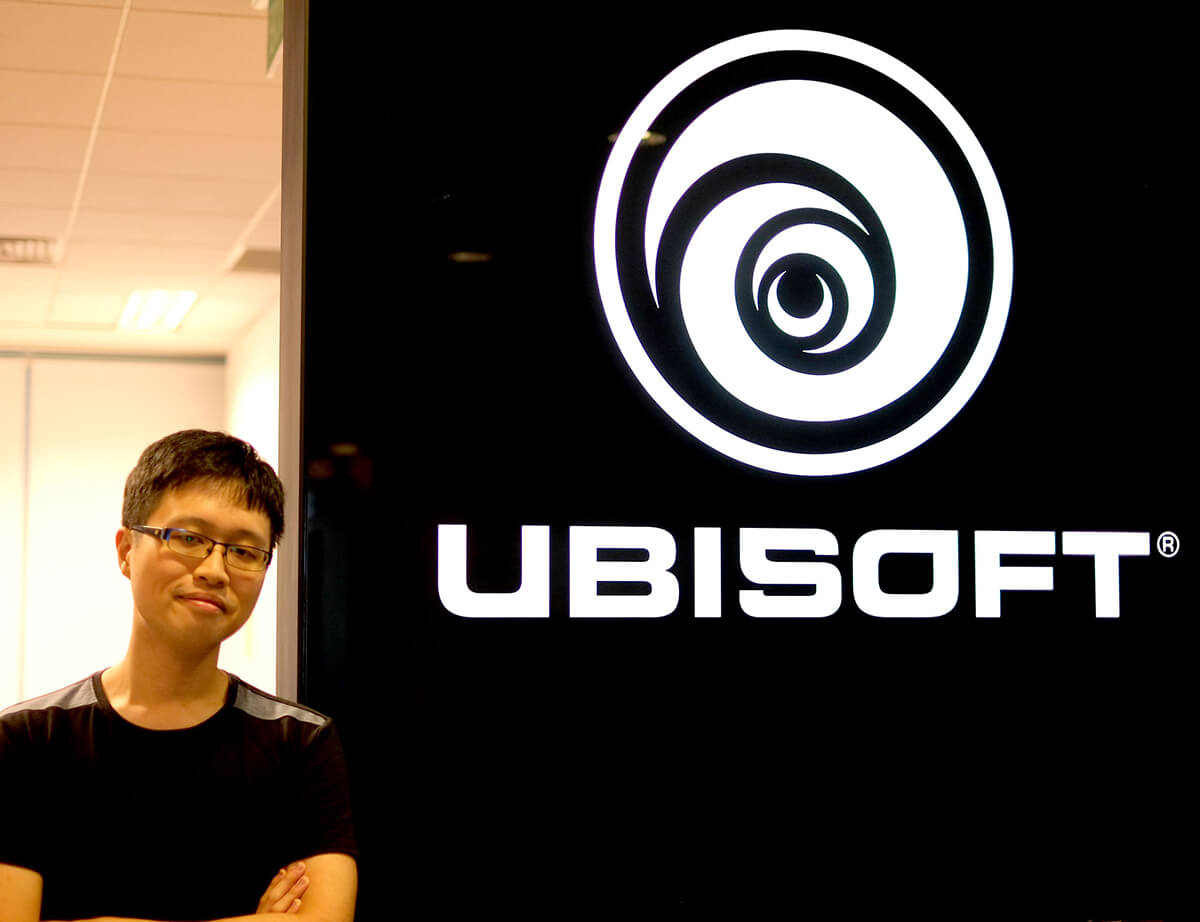 As a final piece of advice for aspiring programmers, Jia Hao says, “Think twice before writing code once. Consider all the other factors, consequences, and edge cases. If it could go wrong, it will go wrong. When bugs appear because of your code, you can end up spending more time fixing them rather than working on your feature, so really think through your code lines before implementing them.”

On a simpler note, Jia Hao encourages everyone to try their best, no matter the subject.

“Be willing to go the distance. I came across a few defeatist attitudes while I was still studying at DigiPen (Singapore), and I want to say that sometimes your own abilities can surprise you,” he says. “People aren’t innately amazing, like how I was not amazing at math. They just put more time into their projects and the end results looks great because of that. You can do it too.”