We last caught up with SIT-DigiPen (Singapore) graduates Koh Naimin, Michael Tay, and Julian Teh a few months ago.

Since then, the three graduates, all Bachelor of Science in Computer Science in Real-Time Interactive Simulation degree holders, have already gotten their hands dirty in research and development work that could help shape the face of the 3D printing and modeling industry as we know it. 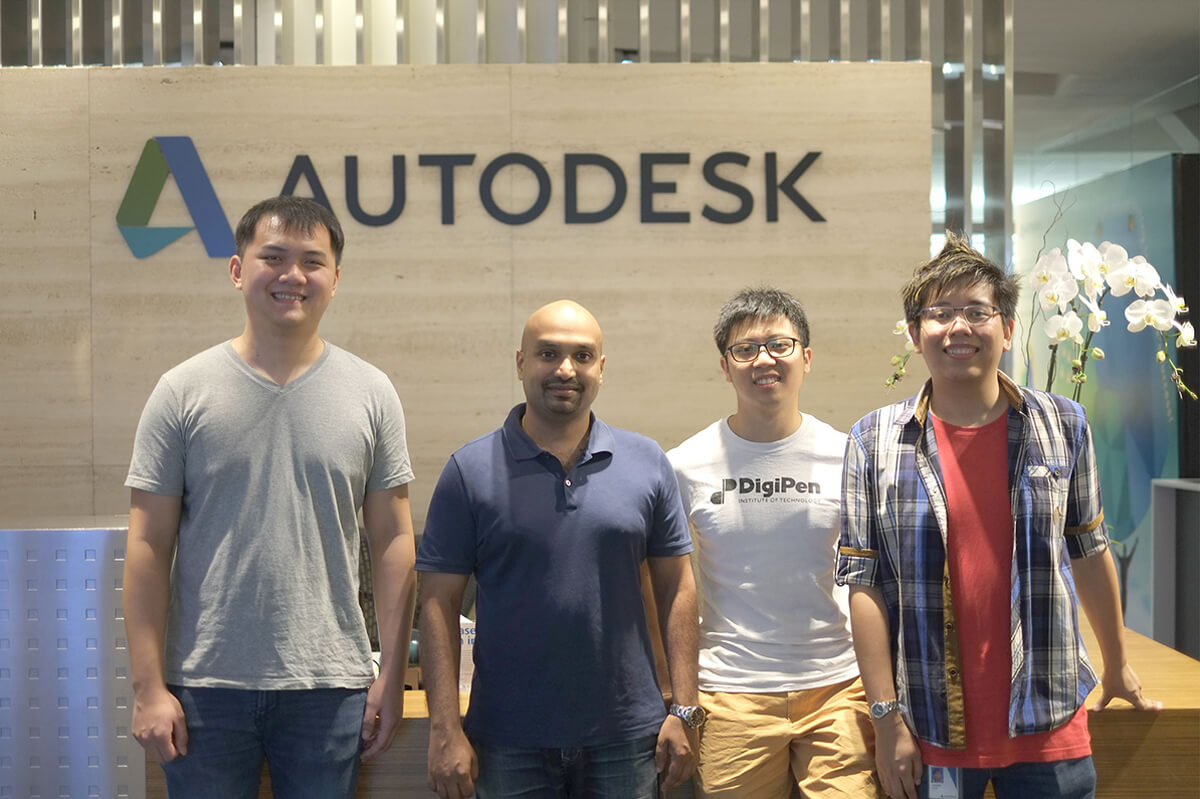 Naimin, who started as an intern for Autodesk, said he has applied most of what he learned as a student in DigiPen (Singapore). Whereas many other Singapore universities focus solely on theoretical research work, his practical foundation at DigiPen (Singapore) prepared him to begin tackling the real-world problems facing 3D printing software.

In a recent software test, he developed a solution for 3D printing software that can handle digital models with up to 3-million polygons. By comparison, he said, most commercial software products will crash at about 100,000 polygons.

“Current 3D printers can print to 10-micron precision,” Naimin said, saying that’s about half the diameter of a strand of human hair. “Theoretically this could print a very detailed 3D model, however, 3D printing software has not caught up to take advantage of the hardware’s level of precision.” The reason for that, he said, is because the available software has not been able to support the large volumes of data that must be processed for such detailed digital models.

To tackle the problem, Naimin devised a method of dissecting the 3D model into many 2D planes, which is similar to how the 3D printing process (also known as additive manufacturing) works. By mirroring this process from the software end, Naimin and his team were able to print higher-detailed models.

Thanks to Naimin’s ability to think laterally, the new software has since been filed for a patent, and a working version of it was shipped in Autodesk ReMake that was launched commercially in May.

On a separate software development front, graduate Michael Tay was tasked to develop a texture engine for a licensed software product that converts 2D photos to 3D models. Because the program was developed by an outside company and is more than a decade old, Autodesk employees who were using the software had little familiarity when it came to resolving some of the program’s technical limitations, such as slow color generation and its inability to support more than 250 2D images.

Thanks to his DigiPen education, Michael was able to identify that the code was written in linear form, so he re-wrote portions of the source code to store data in what is known as a Bounding Volume Hierarchy (BVH) format. This, he says, allowed the program to store and process data in parallel form, supporting up to 5,000 2D images. The software is then supported in cloud computing, which resulted in cost savings from the rendering services, and improved rendering time from 10 days to 10 hours. All of this took just two weeks for Michael to identify and improve on the source code.

“I was able to successfully complete the task because DigiPen’s education exposed me to many hours of software programming, which helped me to look at source codes and be able to spot areas of improvement,” Michael said.

Julian was put in charge of creating tools and interfaces that developers use to write software. After joining the company, Julian said it was taking a long time to learn and use the navigation tools at Autodesk. So he approached his manager with a suggestion to create a library of tools that could better support Autodesk’s developers. Julian overwrote 3D widgets and overhauled several aspects of the existing software interface, such as buttons, functionalities, and icons. He introduced a new library of tools that reduced the time taken to produce a shippable feature from two weeks to just four days. This, in turn, helped Autodesk’s developers — like Naimin and Michael — to work more efficiently. 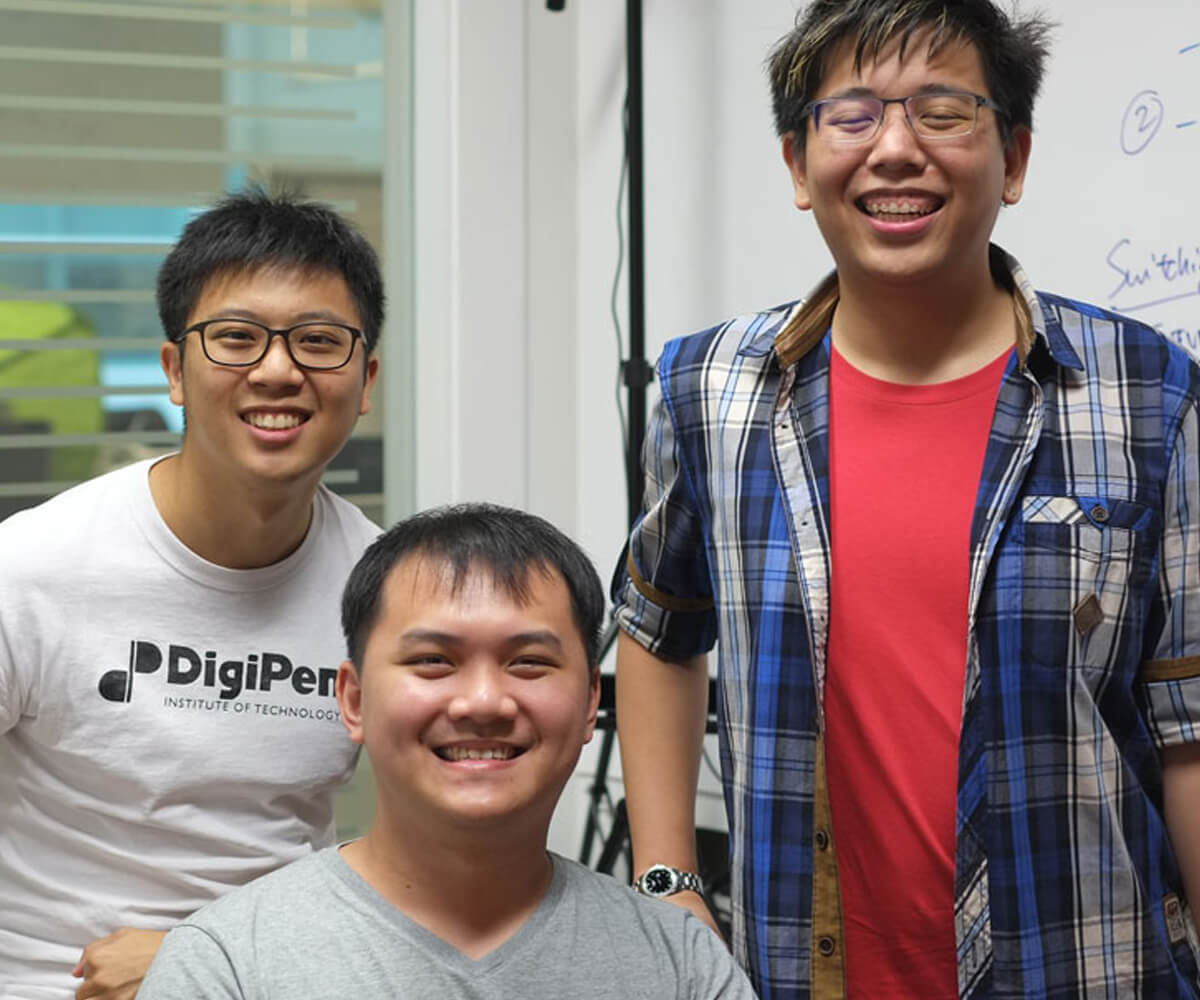 “My biggest takeaway from DigiPen was that I learned how to use the programming languages, graphics, architecture, and data structures well,” said Julian. “Most of my DigiPen education was not focused on just one aspect. This allowed me to learn how all the features ‘play together,’ how they work together, and how each one could plug in a generic system that could be scalable and faster.”

The graduates each credited DigiPen (Singapore)’s rigorous approach to teaching the foundations of computing, programming, mathematics, 2D and 3D simulation, and graphics as being essential preparation for their work at Autodesk. The quick thinking and adaptability needed to change features in a game translates well into the software engineering industries. Thanks to DigiPen’s intensive focus on real-world problem solving, our graduates are able to do meaningful work in the areas of research and development.